ELIMAIA (ELI Multidisciplinary Applications of laser-Ion Acceleration) will be one of the key secondary source based beamlines of the ELI Beamlines user facility. The technological solutions available at the ELIMAIA beamline are the result of a complex investigation carried out in the last several years with the main goal of fulfilling the specific requirements that have been coming from the international multidisciplinary user community.

The general approach for the design, development, and implementation of the ELIMAIA beamline was based on three key features: user-friendly technology implementation, accurate monitoring and reliability of the accelerated ion beams, and flexibility for future upgrades. A complex beamline (ion source, in-vacuum ion beam transport, various dosimetry endpoints, and in-air sample irradiation end-station) is available for users to enable them to apply laser-driven ion beams in multidisciplinary fields. 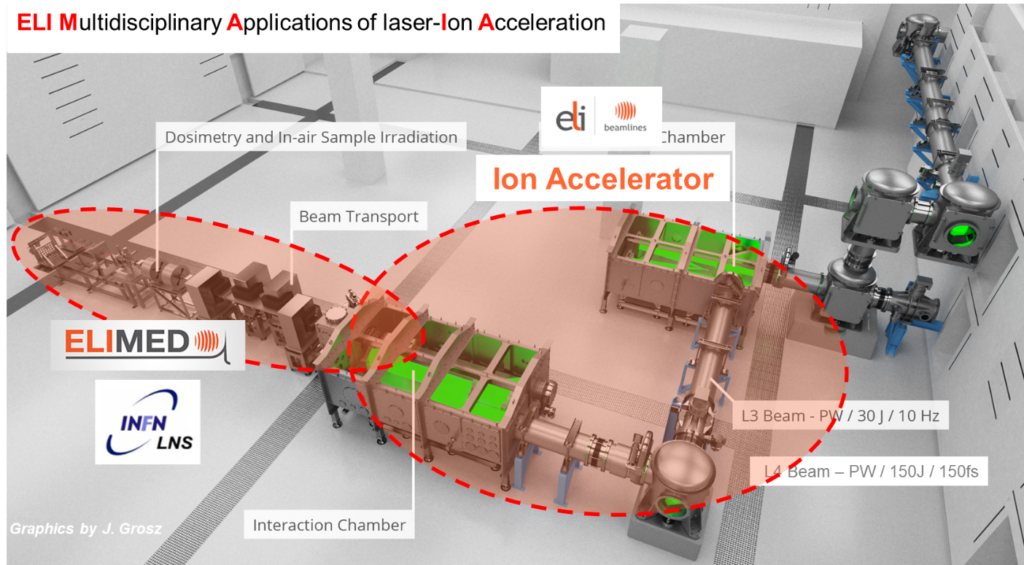 A 3D rendering of the ELIMAIA beamline is shown in the figure above. ELIMAIA is located in the northern part of experimental hall 4 (E4). The available laser beams are L3 HAPLS and L4 ATON (both at 1 PW peak power level) entering E4 from its western wall. The ELIMAIA beamline consists of two main subsystems: Ion Accelerator and ELIMED.

The first subsystem is represented by a double plasma mirror chamber and main interaction chamber. The plasma mirror system allows to clean the laser beam from sub-nanosecond pre-pulses. The beam then continues its propagation into the interaction chamber through a laser diagnostic section where various laser parameters, such as energy, pulse duration and wavefront, are measured. After a proper control of their properties, the laser beams are focused onto the target by off-axis parabolic mirrors. The main proton/ion beam produced at the laser-target interaction point propagates from west to east and is sent into the ELIMED subsystem, which is represented by the in-vacuum ion beam transport and diagnostics, and by the in-air ion beam dosimetry and sample-irradiation sections. The accelerated ions are collected by a set of permanent magnet quadrupoles to be used for a preliminary focalization and for a rough energy selection of the laser-driven ion beams. The beam transport line accommodates various diagnostic systems (high energy Thomson Parabola spectrometer, detector arrays for beam emittance measurements, time-of-flight detectors). The accelerated proton/ion beam is shaped in space and in energy according to the specific request coming from the user. A set of quadrupole magnets, focusing the accelerated particle beam (typically having a high angular divergence), and an energy selector system, selecting the required energy window, is used to address this issue. The particle beam then enters the in-air ion beam dosimetry section where its properties are measured at different positions and further shaped, depending on the specific user application. Therefore, the dose released to the final sample (e.g., a radiobiological one) is monitored with relative and absolute dosimetry systems, ad-hoc developed for ultrahigh dose rate ion bunches, allowing real-time control of the delivered particle beam. A detailed description of the various technologies available at the ELIMAIA beamline can be found in Margarone et al,   Cirrone et al.. The expected ion beam features, along with key equipment available at ELIMAIA, are summarized in the tables below. 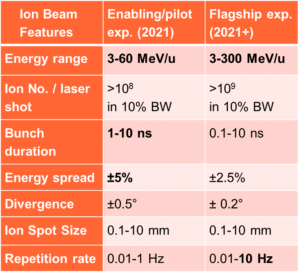 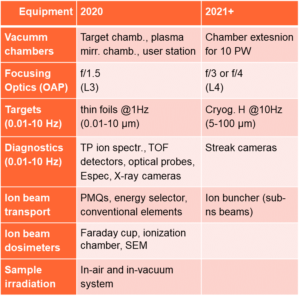