According to the state of the art in laser-driven ion acceleration, maximum proton energies of several tens of MeV have been experimentally achieved with a relatively high yield (1010-1012 protons/pulse). However, laser-accelerated ion beams are still not mature for several applications in which additional features, such as low divergence, monoenergeticity, spatial profile uniformity, or shot-to-shot stability, are essential. Nevertheless, new laser technologies that will soon be available, e.g. ELI Beamlines, will allow the scientific community to investigate new regimes that are very promising in terms of future use of laser-driven ion beams for various applications.

In general, such high energy ion beams are produced in thin solid targets by a strong electric field, which is, in turn, generated by a collective displacement of a large number of electrons. Such fields accelerate ions until charge neutrality is restored and they move together with electrons in a ballistic way. Until now, most of the experiments on laser-driven proton acceleration have been performed in the so-called Target Normal Sheath Acceleration regime (TNSA). The TNSA is based on the space-charge field generated at the rear surface of a micrometer-thick target. Such a quasi-electrostatic field is generated by high energy electrons, also known as “hot electrons”, which are accelerated by a high intensity laser at the target front surface, then cross the target bulk and attempt to escape in a vacuum from the rear side (see figure below) [Macchi et al].

The main direction proposed by the community of experts in this field is to improve the laser-accelerated ion features (maximum energy, yield, emittance, shot-to-shot stability, etc.) in order to propose reliable and very compact approaches to be used for societal applications, thus reducing the overall cost of standard acceleration facilities. The main goal of the ion beamline being developed at ELI Beamlines, ELIMAIA (ELI Multidisciplinary Applications of laser-Ion Acceleration), (add a hyperlink to the page on the “ELIMAIA beamline”) is to provide well-characterized, highly stable and tunable beams of particles accelerated by PW-class lasers to be offered to the user community for multidisciplinary applications. Medical applications are clearly the most attractive among those envisioned, since they might have a strong, positive impact on society. In particular, a potential use of laser-based hadrontherapy facilities is currently under investigation at the international level [ELIMED Workshop]. 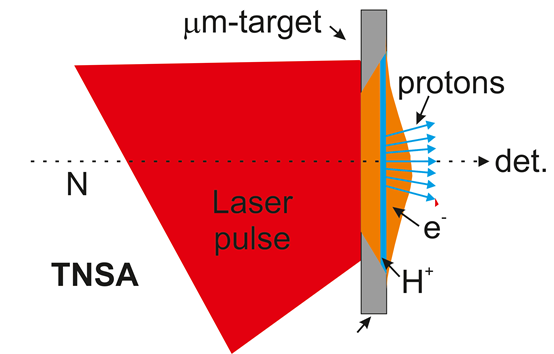 Schematic representation of the TNSA mechanism for proton acceleration (side view).