The source of Betatron X-rays are electrons that are trapped in the ion cavity. They are positioned in the wake of the laser pulse—which is propagating in a gas—and perform oscillations caused by electrostatic forces generated by charge separation. These oscillations generate broadband radiation in the X-ray spectral domain.
Compton scattering source operates by colliding a relativistic electron bunch with an intense laser pulse. This interaction leads emission of hard X-ray (from tens of keV up to MeV) due to a double Doppler upshift of incident photon energy by relativistic electrons.

Relativistic interaction of short-pulse lasers with underdense plasmas has recently led to the emergence of a novel generation of femtosecond X-ray sources. Based on radiation from electrons accelerated in plasma, these sources have the necessary properties to be compact and to deliver collimated, incoherent, and femtosecond radiation.

With recent developments, laser systems can deliver focused intensities above 1018 W/cm2, and the laser-plasma interaction has entered the relativistic regime [1]. At this light intensity, relativistic effects become significant. Electrons can be accelerated within the laser field or in the wakefield of the laser up to relativistic energies. In particular, laser wakefield acceleration has led to the production of high-quality femtosecond relativistic electron bunches, created and accelerated up to the GeV level within plasma measuring only a few millimeters or centimeters [2, 3, 4, 5, 6]. Using these relativistic electrons, several novel X-ray source schemes have been proposed over the past decades to produce collimated and femtosecond radiation in a spectrum ranging from soft X-rays to gamma rays [7]. Most of these schemes are based on the wiggling of relativistic electrons accelerated in a laser wakefield [8, 9]. These sources can deliver X-rays or gamma rays as short as a few femtoseconds, as they inherit the temporal profile of the laser-plasma electron bunch, the few-femtosecond duration of which was recently demonstrated experimentally [10]. 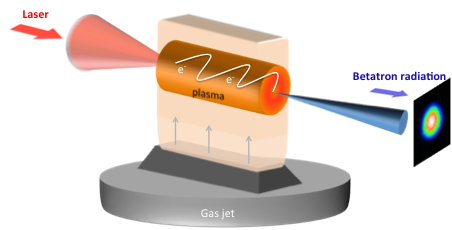 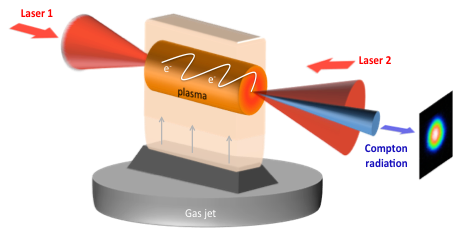 Based on these processes, two X-ray beamlines will be built in the E2 experimental hall.