Fundamental science investigations by breakthrough technology for the society

Fast progress in the laser and free electron laser technology aimed at developing sources of extremely high power electromagnetic radiation has called into being a vast area of nonlinear physics related to the behaviour of matter irradiated by ultraintense electromagnetic fields. The behavior of a plasma under the action of relativistically strong electromagnetic waves generated by high-power lasers shows a broad variety of physical phenomena, processes, and regimes. These processes are of interest in view of developing new methods for acceleration of charged particles, for creation of sources of bright high energy electromagnetic radiation, and for investigation of phenomena of quantum electrodynamics on macroscopic scales.

The ELI-ELBA project, being a part of the RP2 Research Program “Radiation Physics and Electron Acceleration”, focuses on the experimental and theoretical studies of nonlinear coherent wave structures formed in a laser plasma for the creation of compact electron accelerators. Theoretical studies are carried out in close cooperation with the High Field Initiative-HiFI project (hyperlink to the HiFI webpage).

The ELI-ELBA scientific goals are  oriented in two main directions. In the long focus configuration of the multi-petawatt  laser interaction with low density plasma targets the project is oriented towards achieving the highest energy and high quality electron beams with the prospects of using them for fundamental science studies. Opposite limit of moderate power laser pulse irradiating relatively high density plasma targets allows the team to conduct experiments in the high repetition rate regime enabling various applications of the laser accelerated electrons.

As electron acceleration technique, ELI-ELBA experiments are based on Laser Wake Field Acceleration (LWFA), which is at the state of the art capable of producing very energetic (GeV) ultra-short (fs) electron beams by its extremely high accelerating gradients (>100 MeV/mm). The main principles of LWFA are illustrated in Fig. \ref{lwfa}, where the intense laser driver excites plasma waves used to accelerate the electrons.

Figure (1) (a) 1D wake wave: electric field, electrostatic potential, and electron density behind the laser pulse; (b) 3D wake wave (yellow-red) excited by ultra-short pulse laser (blue) in the near critical plasma density targets. In the (x,y) and (x,z) planes the electron density distribution is shown. This simulation has been performed with the ELI Beamlines HPC Eclipse.

Figure (2) Vacuum polarization due to 4 photon, 6 photon, 8 photon.
The work on the LWFA electron accelerator implies the optimization of the laser pulse and target parameters including choosing the injection mechanism and rephasing. 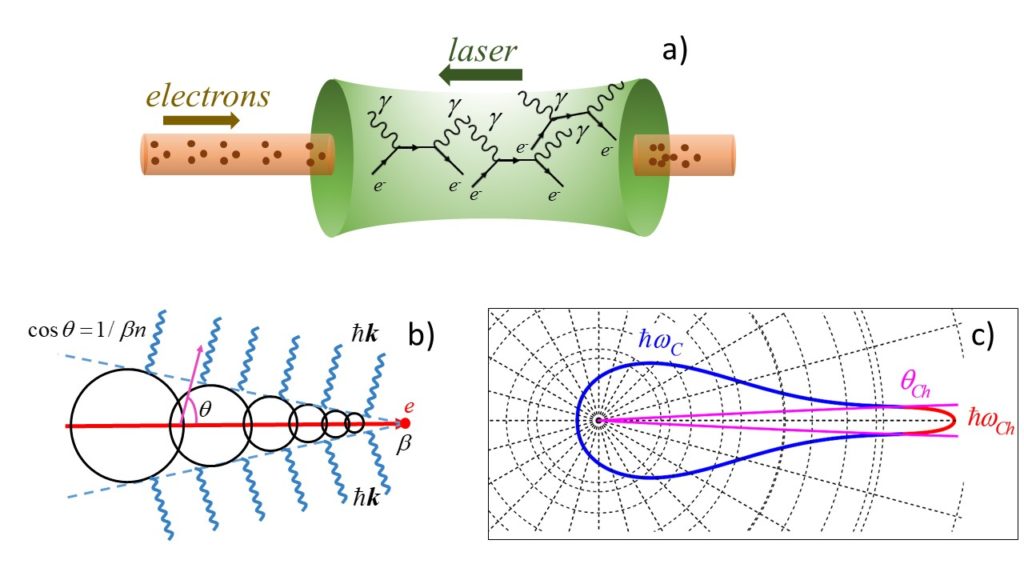 The unique features of LWFA make it a key technology for developing compact electron-positron colliders and for studying novel regimes of electromagnetic field interaction with matter and quantum vacuum, as shown in Fig. 3. In the limit of extremely strong electromagnetic waves, the radiation friction, which accompanies the conversion of radiation from the optical range to the gamma photon energy range, fundamentally changes the plasma behavior. With further increase of the laser intensity the quantum effects of the recoil bring the laser interaction with charged particles to the multi-photon Compton scattering regime. This process is accompanied by the production of electron-positron pairs. These phenomena are also considered for revealing of the vacuum properties predicted by quantum electrodynamics: in the limit of extremely intense electromagnetic fields the Maxwell equations are modified due to the photon-photon scattering  that makes  the vacuum refraction index to depend  on the field amplitude. In presence of  electromagnetic waves the vacuum behaves as a dispersive medium. The laser accelerated ultra-high energy electrons colliding with super-intense electromagnetic field will undergo the Synergic Cherenkov Radiation–Compton Scattering (SCCRS), when the Cherenkov radiation  occurs due to the QED vacuum polarization (see Fig. 3).

The QED vacuum probing requires the electromagnetic radiation amplitude in the electron frame of reference approaching to that of the QED critical field.  With the electromagnetic waves of the amplitude corresponding to the QED critical field it becomes possible to study experimentally the non-perturbative processes described by the quantum field theory. One of the ways towards reaching highest amplitude electromagnetic field is in relying upon the Relativistic Flying Mirror paradigm based on using the nonlinear compression and intensification of electromagnetic pulses after their reflection from the dense electron sheets moving with relativistic velocity, e.g. such the relativistic flying mirrors can be created by nonlinear wake waves in laser plasmas as it is illustrated in Fig. 4. 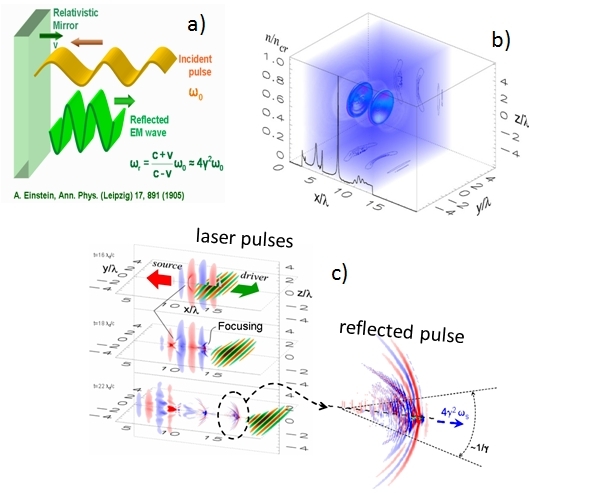 In addressing practical aspects of the usage of the LWFA generated electron beams one of the first application areas lies in the generation of coherent and incoherent X-ray pulses, which are highly demanded by pharmaceutical and medical industry as precise imaging sources. In this context, ELI-ELBA closely cooperates with the colleagues developing the laser driven X-ray sources within the RP2 team. The cooperation with the LUIS team (hyperlink to the LUIS webpage) is aiming at the development of the first laser-driven X-Ray Free Electron Laser (XFEL). The cooperation with the RP2-X team (hyperlink to the RP2-X webpage) is oriented to the production of energetic X-ray by means of Betatron Radiation inside the plasma accelerating cavity, or by means of Inverse Compton Scattering.

Figure (5) The five work packages of ELI–ELBA scientific activity. WP1 is devoted to the development of the LWFA based high energy electron source. With the WP2 the charged particle interaction with extremely intense electromagnetic field is being studied. The electromagnetic wave frequency up-shifting and the wave intensification by colliding the laser pulses counter-propagating in a plasma will be carried out within the WP3 package. The work package WP4 investigates the utilization of radiation sources developed in WP1, WP2, and WP3 in other scientific fields. WP5 is devoted for collaborative technology development with external users and other ELI Bemalines teams. 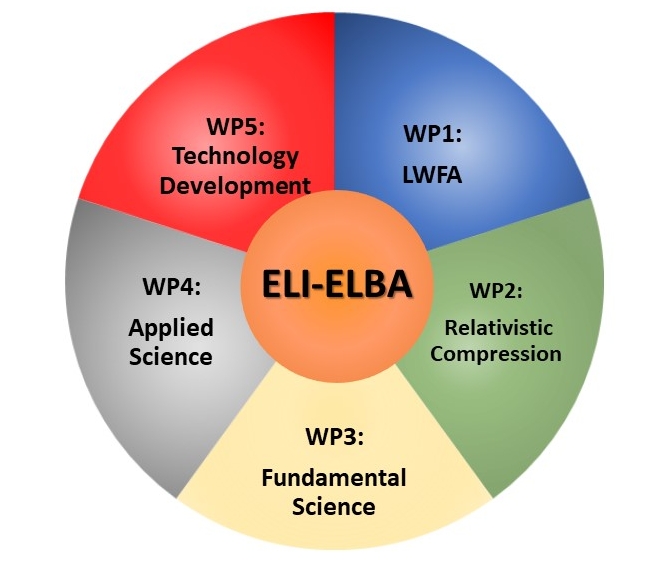 The scientific work being conducted by the ELI-ELBA team can be schematically summarized byt he diagram shown in Fig. 5, where the ELI-ELBA scientific activity is divided into five connected work packages. The first work package, WP1, corresponds to the advancement of the state of the art of LWFA by using the unique ELI-Beamlines laser systems and technology. In Fig. 6 is shown a picture of the experimental hall E5, where the electron acceleration beamline is being installed. The goal of WP1 is to demonstrate new schemes for LWFA leading to the enhancement of the output beam parameters (energy, stability, repetition rate).

Figure (6) (a) Compact electron accelerator with ultrahigh axial electric fields are generated by the ultra-short pulse laser driving the plasma wakefields. (b) Wake field excitation by the laser pulse interacting with the gas jet ejected from the nozzle.  (c) Picture of the experimental hall E5 at ELI Beamlines. The PW laser beam transport and the electron acceleration beamline are being installed.

With the second work package, WP2, the scheme enabling the electromagnetic wave frequency upshifting and the wave intensification will be developed. Frequency upshifting of the laser light can also enable construction of a compact source of coherent, short X-ray pulses. They are demanded in material science, biology and medicine for studying of macro-molecules and micro-structures. Within the framework of the third work package, WP3, will be studied the problems related to basic sciences. The first problem to be addressed is on the radiation friction effects in the high energy laser accelerated electron interaction with super-intense electromagnetic wave both in the regimes of Nonlinear Thomson Scattering and multi-photon Compton scattering. As a result the basic properties of the radiating electron dynamics in the high power laser radiation will be revealed, which will allow the scientists to optimize parameters of the X-ray and gamma-ray radiation sources. The knowledge obtained at this stage will then be used in research on the quantum regimes of electron-electromagnetic wave interaction.

The work package WP4 investigates the utilization of radiation sources developed in WP1, WP2, and WP3 in other scientific fields.  At the state of art, LWFA based sources are being studied for applications in three different areas as:

As the whole ELI Beamlines project, ELI-ELBA is a user oriented program. The fifth work package, WP5, is devoted to the collaborative work with the user teams including their support and technology exchange. The achievements of WP5 will be used to boost the research goals of all the other work packages.