OPA is based on a phenomenon called three-wave mixing, which is a second order nonlinear process. When an optical material is exposed to high intensity optical radiation (typically GW/cm2), the material’s response to the incident electromagnetic wave becomes nonlinear. This nonlinear response allows for new frequencies to be generated.

Usually, there are three beams, referred to as the signal, pump, and idler, that interact in the parametric amplifier. The signal beam is amplified as a result of this interaction, and the idler beam, which is the difference between the photon energies of the signal and pump, is created. However, great care must be taken to phase-match the interacting pulses in order to add up constructively contributions of the nonlinearly amplified signal from the entire volume of the nonlinear crystal. A so-called phase-matching condition can be expressed by a simple equation,

where ks, ki, and kp are wave vectors of the signal, idler, and pump, respectively. The phase-matching condition can be met through the proper orientation of a birefringent crystal, which is used as the nonlinear medium. Noncollinear geometry is often considered for this because it allows for broadband phase-matching. A schematic of the noncollinear OPA geometry is shown below in Figure 1.

The main advantages of OPA are: 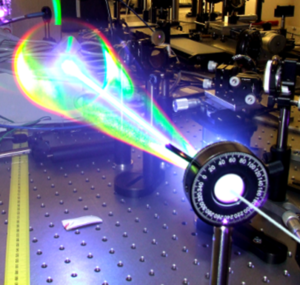