In a PXS source laser, pulses are focused on a renewing solid-density target and ignite a plasma. Hard X-rays emitted from this plasma exhibit a energy spectrum containing both continuum radiation and element specific X-ray emission lines. The X-ray pulse duration - inherit from the driving laser pulse duration - ranges in the hundreds of femtoseconds.

The Plasma X-ray Source (PXS) is a secondary source of hard X-ray radiation, located in Hall E1 and driven by the L1 laser beam. In PXS, femtosecond laser pulses, which feature a repetition rate of 1 kHz, are focused on a renewing metal target (solid tape or liquid jet) in vacuum. The resulting high-intensity light in the focus ionizes the target and accelerates electrons to hundreds of kiloelectron volts (keV). These electrons penetrate the target material, where they create continuum and element specific line X-rays with energies between 1 keV and 77 keV. The photons are emitted from the micrometer-sized plasma volume out of the vacuum chamber through an X-ray transparent window (material: Beryllium) and are focused by grazing incidence or multilayer optics onto the sample. The salient feature of the PXS is the fact that X-radiation is emitted in an ultrashort pulse with a typical temporal length of hundreds of femtoseconds (~10-13 s). Such short pulses will allow scientists to resolve the kinetics of chemical reactions on atomic scales via ultrafast hard X-ray diffraction and X-ray absorption spectroscopy techniques. The inherent synchronization of the X-ray pulse to the driving IR laser will make advanced optical pump-hard X-ray probe methods feasible to study a variety of complex systems, e.g. artificial photosynthetic systems, photoactive biological molecules etc. 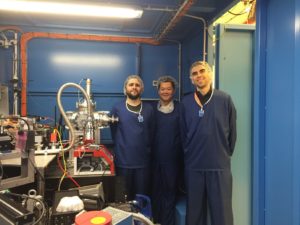