In a messy lab EMP-s behave like poltergeists from a blockbuster movie. It likes to disturb hard-acquired information from an experiment. It distorts a measured voltage/current from delicate sensors, and to overwhelm it by an excess noise. It produces nonexistent signals from probes and also it generates opposite polarity pulses, fast changes or unwanted bias on cables from diagnostics in order to confuse a young physicist with a variable time scale, superluminal speed of particles, inverted causality, negative mass/energy and other philosophic mysteries. It randomly triggers single-shot diagnostic devices before or after a synchronization pulse, never right on the time. It suddenly drives electronic positioners back and forth to avoid a proper alignment. During a laser shot it manages to bypass all levels of protection and it is able to open and/or close any electrically driven door, gate, valve, switch close to the interaction chamber whatever it is vacuum, high-pressure gas, water or power. It generates random pulses in electronic systems, it let disappear data packets on a computer LAN, scrambles data in memories, causes instabilities of acquisition/control and transfer systems. With a more power it freezes controllers, kicks off embedded systems and stops running processors/computers. During a presence of VIP visitors it triggers a safety protection/emergency measures to shut down an entire lab in a middle of an experiment. If it is left free, it can burn probes, sensors, electronic/electric circuits and other valuable devices. It loves to destroy sensitive scientific cameras, expensive high-speed oscilloscopes and custom developed diagnostics. And sometime it pulls even more powerful trick against a well-seasoned experimentalist, like a cascading fault in infrastructure or a personal safety attack that may lead to serious consequences for a facility operation.

From beginning of high power laser use, experimentalists try to tame laser plasma generated electromagnetic pulses. Improvised protection devices often saved experimental campaign. A regular shielding, an appropriate grounding and some structural measures in labs were gradually introduced. Because of stochastic nature of problems and rather aside from a main research topic, regular practices for prevention, protection and mitigation of LP EMP were rarely used. Based often on trials and errors, some labs independently established basic rules for a clean hardware installation and operation of a laser plasma experiment. However with an introduction of HE petawatt lasers, the LP generated EMP power and associated problems literally jumped-up. Increased amount faults and danger triggered by EMP raised concern about lost resources and results. It becomes clear that this challenging issue requires a more systemic solution. Physical processes responsible for LP generated EMP were now investigated in details. New techniques for an accurate EMP measurement were developed. Only recently, LP generated EMP-s started to be sufficiently understood, gauged and managed. More labs decided to share their hard-learned experience in order to perform clean and correct experiments in EMP perturbed environment. Outstanding international effort of several laser plasma labs performed together now bring an ability to handle unruly EMP-s in your lab also. In HPLSE journal was freshly published an extensive review on this topic:

Author Abstract: This paper provides an up to date review of the problems related to the generation, detection and mitigation of strong electromagnetic pulses created in the interaction of high power, high energy laser pulses with different types of solid targets. It includes new experimental data obtained independently at several international laboratories. The mechanisms of electromagnetic field generation are analyzed and considered as a function of the intensity and the spectral range of emissions they produce. The major emphasis is put towards the GHz frequency domain which is the most damaging for electronics and may have important applications. The physics of electromagnetic emissions in other spectral domains, in particular THz and MHz, is also discussed. The theoretical models and numerical simulations are compared with the results of experimental measurements, with special attention to the methodology of measurements and complementary diagnostics. Understanding the underlying physical processes is the basis for developing techniques to mitigate the electromagnetic threat and to harness electromagnetic emissions, which may have promising applications.

ELI Beamlines and PALS facility in Prague also contributed to this review with a recent works. Electromagnetic field resonant modes were calculated for PALS interaction chamber and confirmed in experiment. In particular, influence of target holder for a cryogenic solid-state hydrogen target to EMP emission was investigated. Fig.1 shows a cryogenic nozzle (a), the positions of the probes (b) and typical spectra of signals obtained by probes (c). 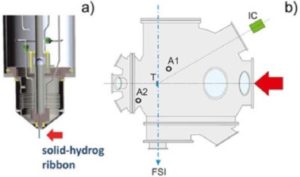 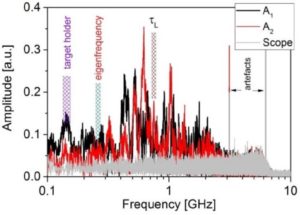 Figure 1(a) ELISE nozzle sketch; (b) diagnostics in the PALS interaction chamber, (c)  The FFT of signals from the probes

ELI Beamlines presented extensive 3D modeling of EMP propagation in the P3 laser chamber and a laser beam transport manifold decisive for am EMP absorption tailoring. Fig.2 shows a detailed structural model used for an EMP propagation simulation in (a) and an electric field snapshot at a time of 75 ns in the central horizontal plane of a vacuum system in (b). 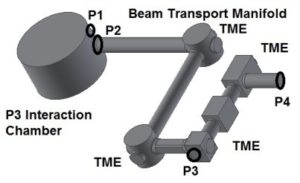 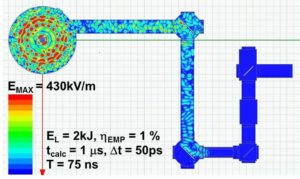 Figure 2 ((a) Detailed structural model used for an EMP propagation simulation. (b) Electric field snapshot at a time of 75 ns in the central horizontal plane of a vacuum system.