The Department of Ion Acceleration and Applications of High Energy Particles, in charge of the development of radiation sources for laser driven Proton Induced X-ray Emission (PIXE) and Deep Proton Activation Analysis (DPAA) for non-destructive analysis of cultural heritage artifacts through the project  Non-destructive methods of monument testing, has recently carried out an experimental measurement on ancient gold coins at ELI Beamlines.

Thanks to the collaboration with the Institute of Archaeology of the Czech Academy of Science (CAS) in Prague, a set of gold (Au) coins originated from the Macedonia area (dated to 200-300 AD) were provided for elemental analyses. Prior X-Ray Fluorescence (XRF) analysis showed that the coins were made of gold alloy with a high Au content (above 90%), where in one case traces of osmium (Os) and Iridium (Ir) elements were also detected.

These elements belong to the Platinum Group Minerals (PGM) containing ruthenium, rhodium, palladium, osmium, iridium, platinum besides other components. They form inclusions in ancient gold alloys and their presence is very important in provenance studies since they prove the use of alluvial gold. The identification of Platinum (Pt), which is the element of the highest amount in the inclusion, is mandatory for the verification of the presence of PGM’s, but unfortunately impossible to detect as a trace element inside a gold matrix due to the limited energy resolution of the Silicon detectors that are typically used in XRF or PIXE analysis.

Usually, trace elements in Au are determined by inductively coupled plasma (ICP) mass spectrometry; however, this technique is micro-destructive, and thus not preferable for samples of archaeological or even historical value. In order to overcome such obstacles, a close cooperation with the Department of Structural Dynamics at ELI Beamlines was of key importance to integrate an X-Ray Emission (XES) spectrometer to the setup for non-destructive analysis of the Pt content.

Firstly, the Au coins were documented by an optical microscope, which revealed the possible positions of the inclusions. Two of them were analyzed by the XES spectrometer (Fig. 1), which analyzed primary x-rays originating from the interaction of a focused x-ray beam (produced in a conventional x-ray tube) with the inclusions. The irradiated atoms in the Au sample, after absorbing the energy of the impinging x-rays, remitted new ones that are characteristic of the elements present on the analyzed surface. Then, a crystal diffracted the emitted x-rays causing separation of different energetic x-ray photons. By placing the x-ray detector at the proper angle, the detection of previously hidden from the x-ray continuum spectrum Pt characteristic lines is possible.

“By using this spectrometer, we confirmed the Pt content in one of the coins. An article to a specialized journal is now in preparation”, said Martina Zakova Greplova from the team of Ion Acceleration and Applications of High Energy Particles.

As next step, we intent to improve the detection limits of the technique by further focusing the x-ray beam on the sample using a poly-capillary lens and examine the inclusions of the whole collection of the coins. Such results are very promising for characterization of samples of cultural heritage interest, thus of high potential societal impact.

Fig. 1: The coin was placed on a frame for the analysis. 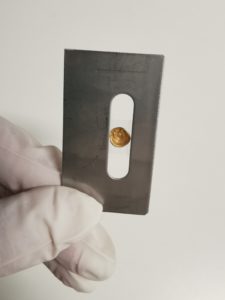 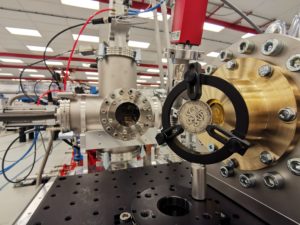 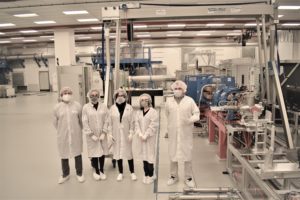