János Hajdu: The pleasure of dealing with “near-fundamental truth”

Prof. János Hajdu, leader of the ELIBIO project at ELI Beamlines, was awarded the Gregori Aminoff Prize from the Royal Swedish Academy of Sciences for his fundamental contributions to the development of X-ray free electron laser based structural biology.

We bring you an interview with J. Hajdu mostly about his professional successes and dreams. Enjoy it!

I drifted into physics. I have a diploma in Chemistry, a Ph.D. in Biology and a D.Sc. in Physics. I started in “wet biochemistry” in 1973, changed to structural biology (X-ray crystallography) in 1981, and moved into “extreme photon science” at around 2000. In my early work, I exploited chemistry to determine the symmetry of multi-subunit protein complexes, and characterised structural transitions in these systems. Detailed studies on function and dynamics require direct structural methods. An invitation to work with Dr. Louise N. Johnson in Oxford landed me in protein crystallography in January 1981 and I spent 16 wonderful years in Oxford. During 1981, the first dedicated synchrotron radiation source came to life in Daresbury, and I was fortunate enough to become one of its first users. Function is a four-dimensional property, and synchrotron radiation provided the firepower needed for our first time-resolved X-ray diffraction experiments. These studies produced the very first movies on catalysis in crystalline enzymes and revealed structural transitions in viruses. Damage to the sample was a limitation and I realised there may be a way to outrun key damage processes by using very short and extremely intense X-ray pulses (speed of light vs. speed of a shock wave). In 1996, I took up a chair at Uppsala University and set up a European research network to explore untried frontiers at the physical limits of imaging. Our results turned into the scientific case that assured funding for the first X-ray free-electron lasers (FELs). FEL-based imaging holds substantial promise, and in 2002 I convinced the management of the Lawrence Livermore National Laboratory (LLNL) to join in. The explicit Mission of LLNL is the Stewardship of the Nuclear Stockpile of the USA, and therefore, it was a pleasant surprise to see our imaging project becoming a Strategic Initiative, which is the highest level of research and development projects at LLNL. This is when Henry Chapman and his colleagues joined us, and somewhat later John Spence too, and we have been working together ever since.

X-ray lasers are creating unprecedented research opportunities in atomic physics, in high-energy density science, and in biology. Our work has opened up a fascinating research area, mixing high-field photon science and plasma physics with structural sciences. Practically everything is new here and a new scientific community has emerged to explore this world. This community did not exist ten years ago, nor did the requisite X-ray lasers.

The pleasure of dealing with “near-fundamental truth”.

There were numerous challenges behind every achievement listed below, but my challenges were kind and interesting. I am slightly dyslexic and love horizontal thinking. The stuff that I had to learn was to find a direction in this chaos.

– Development of Laue crystallography: First electron density maps for proteins and viruses. This was needed for

– First structural characterization of the family of mononuclear ferrous enzymes.

– Discovery of the structural basis for penicillin and cephalosporin formation.

– “Diffraction before destruction” – Estimates on the physical limits in imaging with X-rays.

– The scientific case in imaging for building X-ray free-electron lasers.

– The scientific case in biology for building the European Extreme Light Infrastructure.

A big challenge was to convince Washington to fund the construction of the very first X-ray free-electron laser, the Linac Coherent Light Source at Stanford. We passed this hurdle in 2000. Another big challenge was to convince the EU and the Russian Federation to fund another billion EUR project, the construction of the European XFEL. ELI’s total costs at the three pillars are also near the billion EUR mark.

The European Extreme Light Infrastructure is an exciting project. I got involved with it in 2004 in Paris, and in 2008 I was elected as Co-Chair of the Scientific Advisory Committee of the project. The other co-chair was Toshi Tajima. We are now in 2020, and the project is slowly becoming complete. I have seen the concept evolve and witnessed its progress. I have also seen problems with a divided infrastructure, which is located in three different countries but has to look like a single entity, mainly for political reasons. Progress in Prague is impressive, and I was delighted to accept an offer in 2017 to join ELI Beamlines at Dolní Břežany.

I do not think that the scientific challenges facing ELI Beamlines are unsurmountable. The key challenges here are technical while others are bureaucratic. Every now and then one gets the impression that bureaucracy is a goal built into “the system” instead of a means to achieve something fast in an orderly manner. I admire the abilities of our fearless leaders at ELI.

This is a distinguished prize and I was quite surprised that I was one of the recipients. The prize rewards our explosive studies of biological macromolecules. The idea is unconventional. The roots of it go back to our early synchrotron experiments at the Daresbury Laboratory in 1981. These experiments gave some hints, suggesting that radiation-induced damage processes may be outrun with extremely intense and ultrashort X-ray pulses. This is (in a way) similar to a supersonic aircraft leaving behind its shock waves after crossing the sound barrier. Testing these ideas had to wait until the first X-ray free-electron lasers became available much later. Thinking back, there were a few big gambles that really paid off. But actually, they weren’t really gambles but big ideas and challenges that people rose to. This is how Henry Chapman, a friend and a fellow prize winner summed up the story. Outrunning damage has become the essence of practically all applications of X-ray free-electron lasers today.

Have fun. And more fun. 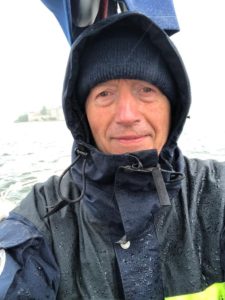