Last September, the L4-laser system, which has been developed over the past four years by an American-European consortium of National Energetics (NE) and Ekspla (Lithuania), arrived from Austin, Texas in Dolní Břežany, Czech Republic. ‘Currently,  the NE and ELI teams are working together to finish the re-assembly of the laser, so that we can start testing if the system performs up to the initial standards it showed in the US,’ says ELI Beamlines scientist František Batysta. 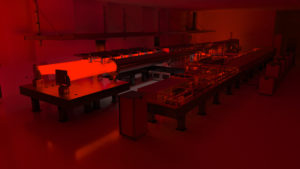 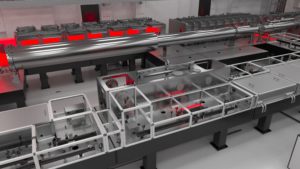 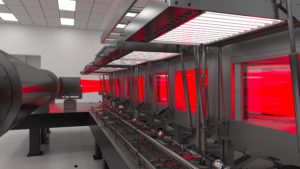 Ultimately, the L4-Aton laser system will be the most energetic laser at the ELI Beamlines facility. With a peak power of 10 petawatt, delivering 1.5 kJ in 150 femtosecond long laser pulses once every minute, the system will represent an unprecedented combination of specifications. ‘Systems with comparable peak powers usually fire only one shot an hour,’ says Batysta. ‘And our system is not only much faster, each pulse will also contain about an order of magnitude more energy than in comparable systems.’

The L4 laser can be operated in two different modes, the scientist explains. ‘In addition to the main 10 PW output, first the laser will be able to deliver almost 2 kilojoule in a narrowband nanosecond beam with programmable temporal shape. This setting is for example useful for warm dense matter experiments, in particular experiments with high density of matter. Meanwhile, in the main mode of operation, the laser system amplifies a broadband pulse, which can be further compressed down to 150 femtoseconds.’ This unprecedented combination of energy, intensity, and repetition rate allows the experimentalists to perform various experiments, such as gamma flashes, electron-positron generation through Compton scattering, and eventually acceleration of electrons and protons.

Compressing huge energies
Before the system was shipped from the US to the continent, all different parts where integrated and the system as a whole was demonstrated to work according to plan. ‘Without the compressor though,’ Batysta hastens to say. ‘Since the chamber needed to compress such high energy laser pulses doesn’t exist yet. It is in fact currently being built here in the Cech Republic, and will be delivered next year.’ Also, in Austin, the system has only been tested up to 1 kilojoule. ‘After we have finished assembling and testing all of the subsystems and output parameters, we can start compressing and ramping up to almost 2 kilojoules.’

Since never before such a huge pulse has been compressed, that will be carefully done in stages as well, he says. ‘We will start by compressing low energy pulses, of say 10 Joules. And then we will gradually increase the energy and carefully assess what happens with the systems and with the wavefront of the laser pulses when exposed to such high energies at those relatively fast repetition rates.’

Though many engineering and physics challenges will have to be overcome before the system will operate according to its record-breaking specifications, Batysta is optimistic. ‘So far, given its recent performance in Austin, it should work.’

*This method is called chirped pulse amplification (CPA) and G. Mourou along with D. Strickland were awarded the 2018 Nobel Prize in Physics for its invention.