The conventional route to nuclear fusion for power generation is based on the reaction between deuterium and tritium nuclei, which yields one alpha particle and one neutron. Formidable technology and sustainability challenges, however, stem from the availability and handling of tritium -a rare, radioactive isotope of hydrogen- as well as from the radiation damage and radioactivity induced by the high-energy neutron in reactor materials. In this respect, the fusion reaction between a proton and a boron-11 nucleus to yield three alpha particles is very attractive as it involves only abundant and stable isotopes in the reactants, and no neutron in the reaction products. Unfortunately, the hydrogen-boron plasma has an ignition temperature which is ten times higher than the deuterium-tritium one, already very challenging to reach in present-day fusion devices (a plasma is “ignited” when the fusion reactions produce enough power to maintain its temperature without external heating). Consequently, proton-boron fusion is prohibitive to exploit under thermonuclear schemes. Nevertheless, in the last 15 years it has effectively been induced by means of high-power lasers, showing an impressive progression in the reaction yield. Following a recent experiment at the Prague Asterix Laser System (PALS), Czech Republic, we report a record yield of 10^11 alpha particles, achieved by focusing a sub-nanosecond, 600 J laser beam onto a boron nitride thick target. We show that such a surprising figure is not of a thermonuclear nature. It is rather explicable in terms of a beam-driven fusion scheme: Due to a well-established mechanism of particle acceleration in the laser-target interaction, protons coming from hydrogen or hydrocarbon surface contamination are injected at high energies inside the target, where they interact with a warm, solid-density, thick boron plasma. The reaction yield achieved this way is 100 times higher than that achieved at the same facility in 2014, and preludes to a further 10-time increase by straightforward optimisation of the target. Our findings, recent theoretical predictions and the advent of dramatically enhanced laser capabilities call for an urgent, systematic investigation of possible ignition schemes in laser-driven proton-boron fusion. 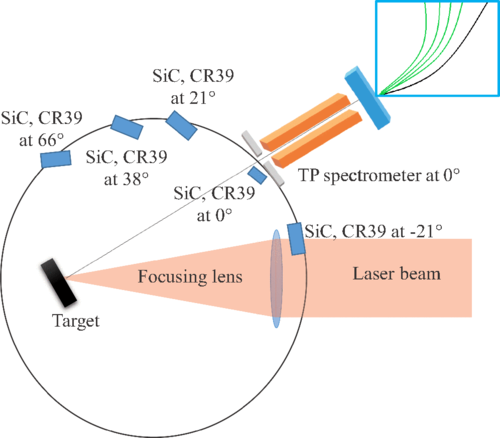 Experimental setup used during this experimental campaign. The laser beam passing through a focusing lens reaches a final dimension of 80 μm onto the target (30° incidence angle). Particle emission is mainly along the normal to the target surface. Several detectors (SiC and CR39) were placed at different angles. A Thomson Parabola spectrometer (TP) was placed at 0°. 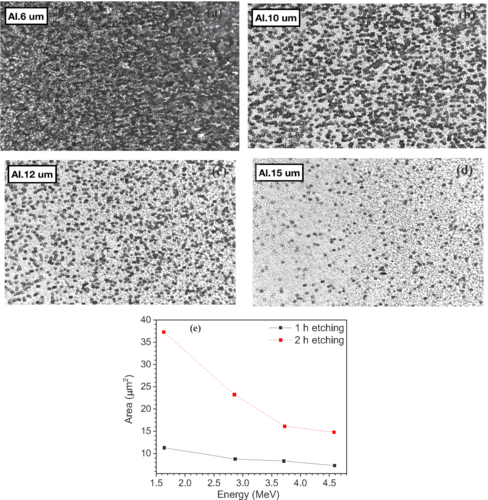 Images from CR39 nuclear track detectors placed at 66°, covered with 6 μm (a), 10 μm (b), 12 μm (c), and 15 μm (d) Al filter, obtained after 1 h of etching time. (e) Evolution of the α-particles tracks as a function of the incident energy. The exposed CR39 were etched in a 6.05N NaOH solution at a constant temperature of 80°C. Different curves in the plot represent two different etching times: 1 h (black curve) and 2 h (red curve). 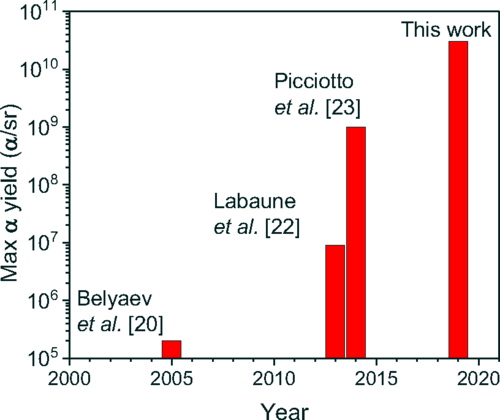 Progression of the most important experimental achievements reported in the literature in terms of maximum α particles/sr.

The experiment was conducted by international teams of experts from CAS (Czech Republic), INFN (Italy) and FBK (Italy), IPPLM (Poland), and funded by the Laserlab-Europe consortium (exp. PALS002126, 2016).

The link of the paper find here.