The Laser Undulator Illuminating Source (LUIS) beam line (former LUX) is aimed at providing users with few-nm and few-fs X-ray pulses, enabling samples to be studied within a highly interesting water window region and providing high contrast especially for biological samples. In addition, two auxiliary beams with pulse durations of <30 fs and <7 fs (with ultra-broad spectrum) will be synchronized with the X-ray pulse with precision of a few fs, to enable excellent pump and probe experiments. The LUIS development is based on the LUX achievements (collaboration between University of Hamburg and ELI Beamlines: http://lux.cfel.de/) and the LUX deliveries to ELI Beamlines, made during the period 2018-2019.

The LUIS team is working in collaboration with all technical teams of ELI Beamlines, the HiFI theory group of ELI Beamlines (leader: Prof. Sergey Bulanov) and the ELBA (Electron Beam Acceleration) team (leader: Gabriele Grittani/PhD). The LUIS team established the international collaborations with the University of Hamburg (Germany), DESY (Hamburg, Germany), University of Osaka (Japan), Kansai Photon Science Institute (Nara, Japan), the Royal Holloway and Bedford New College (United Kingdom), the Wroclaw University of Science and Technology (Wroclaw, Poland) as well as with the EuPRAXIA international community and the Czech Universities. The LUIS beam line is aimed, starting from the PHASE1 setup, as a user beam line providing X-ray pulses with wavelengths ranging between 0.4 to 5 nm and roughly 106  incoherent photons for a few fs long pulses. The maximum repetition rate from 3 Hz (using L3 laser) to 20 Hz (using L2 laser) during hour-long runs. The LUIS X-ray pulse wavelengths cover the water window region, making the beam line very interesting for studying biological samples because of the high protein to water contrast. The LUIS beam line will be driven at the beginning of the development by the PW-class L3 laser, which will also be used to drive two auxiliary beams providing a few mJ 30 fs pulses and 1 mJ 5 fs pulse. The LUIS X-ray pulse and auxiliary pulses will be inherently synchronized with a precision of better than 10 fs, which will enable a large range of pump-and-probe experiments on the user demand.

LUIS photon beam users are expected to have access to either one of the experimental end-stations provided by ELI Beamlines and may bring their own complete experimental equipment, which can be installed in the E5-LUIS experimental area.

The photon user operation using the LUX setup (DESY campus, Hamburg, Germany) started from of 2018. The users are able to put the experimental setup in the LUX tunnel. The first user operation using the LUIS setup (PHASE1) at ELI-Beamlines depends on the laser beam transport and the LUIS developments (aim: October 2021). The LUIS setup after realization of the development plan (staring from PHASE1 and ending at PHASE4, Picture 1) will allow to provide users improved quality of the electron and photon beams, aiming to the laser-driven compact Free Electron Laser operation with the coherent photon brightness more than 1029 photons per pulse per mm2/mrad2 per 0.1%bw (Figure 2). 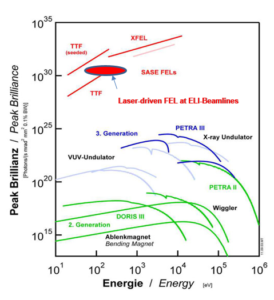 Figure 2: Peak brilliance of the photon beam for the “laser-driven” Free Electron Laser at ELI Beamlines.