The Control System (CS) and Data Acquisition System (DAQ) is the technolgy part of ELI Beamlines facility. The main roles of control system can be summarized in two points:

The facility technologies are distributed in the whole building and its top level view is shown in the following picture. 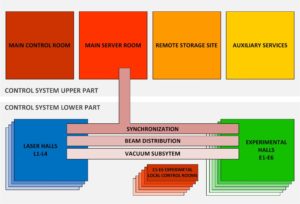 As depicted in the picture the control and controlled technolgy are divide into two parts:

There are three main parts of controlled technology:

Of course all parts of control and data acquisition systems have to communicate, therefore one of the key technologies is control system network.

The component based approach is shown on the following picture. 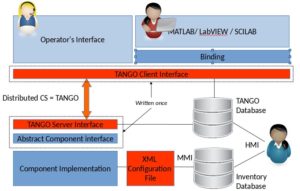 Also special software components were developed or are in development in ELI Beamlines, examples are:

User access would be as simple as possible, shall support standard software tools used by user/scientific community and provide user technology integration environment. In summary, all these requirements are fulfilled by: